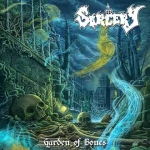 I can make this review real quick. SORCERY’s "Garden Of Bones" is soooooo good. Really. That’s all you need to know. But I guess I should give more than that. Three years after Sweden’s Death Metallers’ "Arrival At Six", "Garden Of Bones" swarms in with buzzing electricity sure to shake the foundation of old school Death Metal to its core. Vocalist Ola Malmstrom, guitarists Paul Johannson and Johan Wickholm, bassist Jacob Wiberg and drummer Emil Berglin understand the genre. There’s no filler here. It’s pure brutal, kick-ass Metal throughout. The opening track ‘Holy Ground’ bludgeons its way through our skulls as ‘The New Armageddon’ lumbers and crushes into an, at first, slowed down beginning, then a fuel-driven bombast of fury. ‘Insanity Arise’ (a re-recording from their 1992 demo "Malculated" – Frank) saunters into the room with a thrashing, Death Metal approach that could easily have crawled from the early nineties. ‘Dark Waves’ winds its way into a swirling maelstrom of fast-paced guitars and catapulting drums. And the album never lets up. The burrowing guitars of ‘Hellstorm’, the ever-changing ‘Cleansed By Fire’, the pure adrenalin of ‘Mass Murder (another re-recorded 1992 demo track – Frank), the classic feel of ‘The Creator’, the demon-driven ‘Black Wings’ and the final triumph of ‘Garden Of Bones’ make this album a force to be reckoned with. The sign of a pure Death Metal album is one that never lets up… an album that stretches out its clawed hand and squeezes the breath out of our lungs. "Garden Of Bones" is a crushing album of brilliance. Does it offer anything new? It doesn’t have to. It’s exactly what the undertaker ordered. For more information, check out www.sorcery.se, www.facebook.com/sorcerydeathmetal, www.xtreemmusic.com