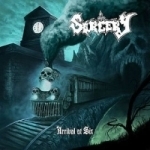 It is said that when an ancient demon awakens from a deep long slumber, its strength will not be equal to that when it was used to fight with fire and rage in its prime… time, takes its toll and no one can avoid that… unless, of course it is “the chosen one”… and up to this day, I am afraid that the prodigal sun of the Svensk dodsmetal revival has not landed yet… ”Arrival At Six”, the second album from SORCERY, arrives 22 years after their great debut “Bloodchilling Tales” which is actually one of my all time faves from the golden era of Death Metal from Sweden… and even if I had high hopes for this, I also knew deep in my heart that time, that wise sign of Cronos, will be merciless… no matter if the original guitar player and vocalist are here… this is still not the comeback album that will teach the younger (and older ones too) how it is supposed to be done. One thing is the noticeable change in the vocal delivery we have now. At times it is way more shouted than it should be for its own good and gives a weird Hardcore touch which the music itself has not… also, the vocals are way too much up-front in the overall production, thus making it a bit hard not to notice it… and then, it is time for the music… the music… well, it is actually not that bad, it still possess that evil touch of Death, but from the Swedish school of Death Metal I was expecting a way louder guitar sound… still, there are more than a few killer riffs and songs in here, and if something must be said is that the music style of the band still remains the same, a brutal Death Metal attack that recalls early MORDID ANGEL, CARCASS and DEATH with evil Thrash Metal influences in the KREATOR / SLAYER / CELTIC FROST vein. I totally worship the great cover art and the fact that the band is still doing what they were creating so many years ago. If only they had gone for a different production and the vocals were less shouted, this would have been near that “Chosen one”. Still, we will keep waiting until the stars are aligned and maybe if time is not such a dagger we will witness it. www.facebook.com/pages/sorcery/308658977440, www.xtreemmusic.com

Julián “Master of the chains” Núñez

Julián “Master of the chains” Núñez