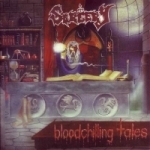 This is actually a re-re-release, cause SORCERY’s one and only full length album “Bloodchilling Tales” (which originally came out on the very small label Underground Records back in the early ninetees) already got re-issued on CD via No Colours a while ago. Back then it only had the songs off the band’s Thrash Records 7″ EP “Rivers Of The Dead” as a bonus (‘Rivers Of The Dead’ and ‘The Rite Of Sacrifice’). Unfortunately exactly those EP tracks are missing on here now, probably due to time restrictions of the CD format… Well, even though this seems pretty disappointing for die hard SORCERY fans at first, let me tell you that both of ’em got re-recorded for “Bloodchilling Tales” anyway, so you’re not completely missing out on something here. And from my point of view the decision to replace them with both classic SORCERY demos easily makes up for that little loss. So, instead of the EP material you’re getting the complete “Ancient Creation” demo from 1988 and the “Unholy Crusade” demo from 1989 (which means 12 tracks in total!!)! When you compare the material from those days to how the band presented themselves on the album you’ll easily find out that SORCERY evolved from a pretty raw and hateful Thrash Metal act (in the vein of their country mates MERCILESS) into a pure Swedish Death Metal horde, with typical Death Metal vocals. I’m not sure if producer Tomas Skogsberg had any influence on that (as he produced “Bloodchilling Tales” at his famous Sunlight Studio), but somehow I doubt it, as the EP songs already indicated this change of style. I enjoy both sides of the band immensely and would’ve loved to hear more of them in general, but as you probably all know, that unfortunately never turned into reality… The packaging of this CD is a little poor in my opinion (just the lyrics for the “Bloodchilling Tales” album) and by no means reflects the musical quality included. But of course it’s still better this way than not having the release at all. For all further info contact www.no-colours-records.de.