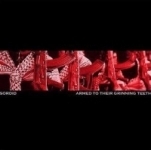 “Armed To Their Grinning Teeth” is the debut album by this young brutal Swedish Death Metal outfit which was formed in early 1999. After having released a 7″EP called “Death” in 2001 and a selftitled CD-R EP in 2002 the masters of Forensick Music took care of these youngsters and offered them a contract to unleash their brutality upon mankind. And it was a good choice as this album totally convinces me. These four Northmen deliver us a lethal dose of brutal and fast Death Metal. They don’t make the mistake to be the fastest band in the universe. Yeah, they are fast (not for the sake of being fast) but the keyword for them is variation to make the whole thing not monotonous. SORDID mixes old school Death Metal together with some old CARCASS (“Necroticism” – era) influences and add the technical perfection, sickness, sewing machine like blastbeats and some heavy midpaced parts (brutal US-style Death) to a lethal cocktail. If you take these first choice ingredients and wrap it into a heavy and powerful sound then you get as result “Armed To Their Grinning Teeth” which is nothing else than a fresh sounding and enjoyable brutal Death Metal album. The musicians are competent and the ten songs are tight and well executed and everything is out of one piece. With bands like INSISION, IMMERSED IN BLOOD, VISCERAL BLEEDING, DERANGED, STRANGULATION, KAAMOS, IMPERIOUS etc. the Swedish scene proofed its high potential already in the past. Without any doubt Sweden has one of the best Death Metal scenes on this rotten planet (like in the early 90s) with killer bands around and SORDID are amongst them! So check out your local record dealer or mailorder and get hold of this album. Contact the band by email info@sordid-online.com or for more info check out their web site under www.sordid-online.com. For label contact check out www.forensickmusic.com. Well done boys!!