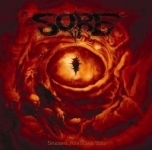 Here it is, finally, the first album of this NRW (Germany) underground all-star band, created by members of KADAVERFICKER (Goreminister, vocals), DEPRESSION (Marc, bass), REMAIN (Swobo, guitar) and two members of INSIGNIUM, which abandoned the band, so Andy (BEREAVED) took over the drums. After a presentation promo which came from the same recording sessions, but without mix, they directly jump to a full-length CD released by the label of Marc and Ron of DEPRESSION, Suffer Productions. After having seen them three times live (with really good shows, by the way) and having listened the CD quite some times, I must say it’s still hard to find a clear definition of their style, and I think this is the best point they have, as, without leaving the old school Death Metal flavour, the mix of influences has done quite an original result, or at least not that usual. If we start with guitars, we could say that mostly they focus on deep and heavy riffs (the tuning is low), as well as some pickings in the pure Swedish vein too, and, especially, groovy rhythms (the best example is ‘Crags To The Infinite’), which are even more effective live; but on the other side are the drum parts, which give a more modern and brutal approach, with the presence of blastbeats and playing with a lot of differents rythms (without any doubt Andy did a great job on this recording, despite his young age). Then, on the vocal side we have really low registers, almost guttural, but which are not too froggy-styled nor remain on a Swedish or Tampa styled stuff; it’s hard to define, but it’s deeper and more stomachal, except for one track or two, where he does some piggy stuff. Let’s just say that the whole stuff together doesn’t sound like one thing or the other, they are not a brutal Death band, nor a Swedish old school one, nor, in any case, an American influenced one; they just take all the influences and fuse them in a really good way. The production was done by Skaldir (known for his project, HEL), at Sunset Studios, and it is another positive point, as it is really appropiate for SORE’s music, deep and powerful, and not too dirty, better clear, and at the same tame the bass and the guitars sound low, and the drums are up enough to listen to them clearly, which sometimes is not so easy when a production is so low, but it would be a pitty in this case. What else can you ask for? Well, the artwork is really cool too, and in agreement with the CD, with an impressive cover (and, as far as I know, done by a guy which had never done any before nor knew anything about this kind of music, which is quite an achievement), a bit similar to the ones of Dan Seagrave or something like that, and the CD comes with a vinyl-like printing. Anything else? Well, they include a video too, of the ‘Crags To The Infinite’ track, really well done, and happening between some catacombs and a forest, really dark and sinister. I wouldn’t give them the highest scoring because I know they can finish putting all their influences together and create something even more compact on their next work if they work hard, but don’t let this CD pass if you like heavy, groovy and oldstyled Death Metal, because you’ll find original stuff here. Oh, I forgot to say they include a great ‘Boneyard’ cover from IMPETIGO and ‘The Exorcist’ from DEPRESSION, slightly rearranged into SORE’s style, which means a bit more brutality. www.suffer-prod.de.vu