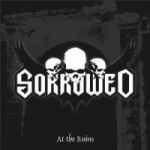 Combining both something new – and something old may even make things to work for some bands. It’s not too often when bands make it really work for them – and others as well for that matter (music listeners cannot be forgotten completely, can they?). Having never heard of this Finnish trio before, that combines Thrash Metal with slices of Death Metal – and spice their things up with enough nicely loaded melodies, it’s kinda uplifting to hear a band that has given some thought for their stuff before entering the studio, just to get something recorded and out as quickly as possible. SORROWED is such a band, in which some of these aforementioned ingredients clash somewhat seamlessly, throwing a decent sounding Thrash / Death Metal plate to our hands. On the band’s info kit, there’s been mentioned that SLAYER and PANTERA – as well as MORBID ANGEL, CARCASS and DEATH, have worked out as some sort of inspirations for this Finnish trio called SORROWED. I can subscribe at least such names as SLAYER and DEATH, as there indeed can be found some little bits and pieces of both DEATH and SLAYER, from the core sound of SORROWED. Then later era CARCASS tends to cross my mind for the very same reason, as with those aforementioned DEATH and SLAYER. The vicious riffs, a big part of their hooky tempos changes, the grunty vocals – and how to balance some of more extreme parts with melody sections within the band’s relatively smoothly Thrash / Death Metal outbursts, they all speak for these fellows’ willingness and determination for making a slight difference with SORROWED. It cannot be denied either that much of their stuff sounds like it’s been borrowed somewhere else already. Maybe that’s even the case with SORROWED’s stuff but who’s saying you should invent the wheel all over again, every time whenever you feel like doing something that comes straight and purely from your heart, or soul even? I’d would say the guys of SORROWED don’t have to prove anything because as long as something sounds good enough, and makes one eventually return back to it, then it should be all good and worth something, right? SORROWED may be recycling quite a few things through their sound here and there indeed but they do recycle them beautifully. More ’bout this Finnish trio thought, at: www.facebook.com/sorrowedband, label: www.inverse.fi