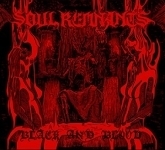 In 2009, Massachusetts’ own warmongers left some chopwork to be unfinished. These lads’ debut album, "Plague Of The Universe", which they self-released 4 years ago, on that particular album they set the bar high for themselves already. It was an all-out excellently thrown first stone from them, without making any compromising in regard to the guys’ determination to come up with an album they could be proud of afterwards. "Black And Blood", SOUL REMNANTS’s follow-up album – only this time released by Horror Pain Gore Death Productions, is another fine tour de force from these follows, to create something which should make them darn proud of again. SOUL REMNANTS seem to have this rare ability to fuse skillfully elements from the brutality of Death Metal to grimness and melodiousness of Black Metal – and in such a tasteful way, without sounding artificial or fake a bit at all. When listening to "Black And Blood", it’s safe to say that they surely have become familiar with many landmark releases of some Norwegian – and especially Swedish melodic blackened Death Metal releases ("The Nocturnal Silence" by NECROPHOBIC, "The Somberlain" by DISSECTION, etc.) over the years, plus they have never stopped liking US Death Metal veterans like DEICIDE or England’s kings of gore CARCASS either. From a very epic and multi-layered sounding track ‘Dead Black (Heart Of Ice)’, which obviously has this strongest Norse vibe incorporated into it – to a ferocious song like ‘Rape Casket’, which has a thing of two that even might remind a bunch of us of some DEICIDE-sque and CARCASS type of intense riff bombardment, to a partly TERRORIZER reeking ‘Symptoms Of Death’ , there’s no question of these American lads’ musical skills. They are able to do just about anything in terms of combining – almost virtuoso-like, extreme Metal genres into a solid wholeness. "Black And Blood" is a crispy, heavy, intense, ingenious and meaty sounding record, truly full of potential to become one of the best extreme Metal releases in 2013. I mean, seriously. You’ll be damned if you don’t check this out. SOUL REMNANTS: www.facebook.com/chopwork, label: www.horrorpaingoredeath.com