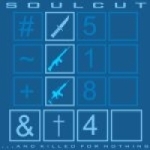 SOULCUT
...And Killed For Nothing
(self-financed)
35:43min

This German five-piece (originally founded in 1997 under the moniker ORANGE LIQUID) offers eight dark yet melodic Death Metal Songs on their first self-financed CD that remind me a lot of old Swedish Death Metal as well as ancient British Death. Unfortunately the sound quality of the whole CD is extremely bad and ruins a lot of the musical potential SOULCUT undoubtedly have. The whole thing simply sounds too mushy, all instruments are drowned in a sea of bassy rumblings and so “… And Killed For Nothing” remains far away from today’s standards in terms of production and soundscape. And that’s a damn shame, because the riffs, vocals and rhythms are absolutely ok, SOULCUT have interesting socio-critical lyrics and an overall convincing and individual songwriting. I think this band should save each penny for the production of their next release and maybe then SOULCUT’s heavy, original and moody Death Metal will be able to enter competition with the hordes of demo / underground bands, that sound miles better than them. And SOULCUT guys… don’t get discouraged by what I just said, but you should be aware of the fact that today newcomer bands do not sound like garage recordings anymore! For additional info check out SOULCUT’s website www.soulcut.de, send an email to info@soulcut.de or write to: Walter Weichbrodt, c/o SOULCUT, Vereinsstr. 69, 48599, Germany