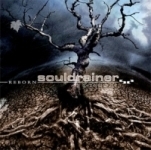 Östersund is a small countryside town in the north east of Sweden which you actually don’t have to know? The only thing I remember from travelling there is the fucking camping place. Well looking through my Swedish music collection I rush into names like SETHERIAL, AEON, DEFACED CREATION (R.I.P.), SANCTIFICATION or IN BATTLE heading from that area. Well, SOULDRAINER is basically also an incest band from members of those located bands, but instead of speed orgies it seems that “Reborn” is their attempt to follow the path already conquered succesfully by Peter Tägtgren and HYPOCRISY. Well, imagine the slow, depressive and bombastic tracks from HYPOCRISY and you’ll have a clue where SOULDRAINER will guide you. In some way the Östersund five piece sounds like HYPO’s little brother, not original, not unqiue, not special, but qualitywise well done. They manage to create a really depressive, threatening and edge driven atmosphere – darker than some Black Metal bands will ever be. I remember that they already went into the direction on their demo CD, which you could download on their HP a few years ago, but compared to that I appreciated the pure Death Metal growls more back then. Those on “Reborn” have some more screamy elements and atmospheric ones going hand in hand, but in some way they sound a bit clinic and studio constructed. Well, you get used to them after a few more listenings and songwritingwise this already 2005 recorded album is solid as fuck. I would wish that this band had a bit more own personal touch, cause it’s quite hard to avoid those HYPOCRISY comparisons. Cover and layout is done by Progart (EVERGREY etc.) and soundwise this product is pure Swedish Metal quality, which means “Reborn” shows potential, but SOULDRAINER should take care much more about an individual sounding output instead of having the shadow layer of being a copycat above their art. Have a listen at: www.myspace.com/souldrainer