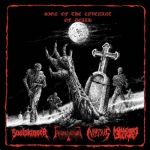 “Sign Of The Covenant Of Death” is the title of a recent four-way split released by Iron, Blood And Death Corporation that features four Greek acts: SOULSKINNER, OBSECRATION, ABYSSUS and MALICIOUS SILENCE. What we have here is a relentless piece of old school Death Metal distributed in 33 minutes. Every band features 2 songs. SOULSKINNER opens fire with ‘God Of The Deep’ and continues with ‘Creation Of Cosmos’. Both are good tracks, charged with some great riffing, good vocals and fast drums. If you have heard their first album and you enjoyed it, this will be OK for you. The next 2 tracks here belong to OBSECRATION, an act that is still around from 1990 releasing great stuff. Their style of Death Metal is still intact and you can recall some resources from their two first albums (“The Inheritors Of Pain” from 1996 and the weird “Oceanum Oblivione” from 2000). The songs are ‘R.I.P. (Rest In Pieces)’ and ‘Revenge’ and both are pure old school Death Metal (the way it should be!). ABYSSUS offers one original track, ‘Echoes Of Desolation’ and a good OBITUARY cover (‘Godly Beings’) while MALICIOUS SILENCE presents one original composition ‘Seed Of Utopia’ and a BOLT THROWER cover track (‘When Cannons Fade’). If you’re into underground Greek Death Metal (think about NORDOR, ACID DEATH, HORRIFIED etc.), this should be in your collection. More information on the featured bands you will find at www.facebook.com/soulskinnerband, www.facebook.com/obsecration or www.facebook.com/abyssus-144338552349700. Label contact at www.facebook.com/ibdc666