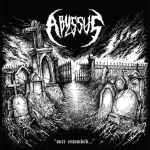 Last year, ABYSSUS from Greece released a very fine first full length album. “Into The Abyss” nodded to the old school of Florida Death Metal with a mighty OBITUARY bias and sounded very fine. That album showed them old geezers where the rubber meets the road, or better how old fashioned Death Metal should sound. But of corpse “Into The Abyss” did not come from out of nowhere. ABYSSUS did some recordings before since their foundation in 2011 and put them out in sometimes strictly limited editions. Now all of them are available again on only one disc. India’s own Transcending Obscurity is responsible for this compilation of goodies called “Once Entombed…” and released it as a limited CD with only 300 copies made. Since the releases are featured in a reversed, anti-chronological order, the CD starts off with the two most recent tracks, taken from a split effort with Greek country mates SLAKTGRAV released in 2014. The short CELTIC FROST styled ‘Phobos’ and ‘Chaos Is My Life’, originally by THE EXPLOITED, are quite unusual for ABYSSUS, yet cool, especially the cover tune that just rocks. Next up are the songs from the very fine “Summon The Dead” cassette EP of that same year, who are also available on a split album with Czech veterans MORBIDER. The four original tunes are great nods to the old school of grooving and morbid Death Metal, especially ‘Sacrifice’, that even asks the listener the important question: “Are you morbid?” Yes, I am! And ‘Remnants Of War’ is a song OBITUARY would kill for nowadays… Maybe even back then, I’m not sure. With ‘Outbreak Of Evil’, we also find a very cool SODOM cover that even is absolutely my speed for sure! A year prior to this fine release, ABYSSUS shared another (tape) album called “No Life In The Coffin”, back then with their country mates NOCTURNAL VOMIT. The four songs here reached an equally high level, so again we have four grooving Death Metal goodies to listen to. The first version of ‘Remnants Of War’ might not reach the quality of the one a year later, but the short, to the point ‘Left To Suffer’ and the great and very variable ‘Unleash The Storm’ are too good to be left unheard. The only flaw here is a pretty unsuccessful adaption of ‘Deathhammer’, a new classic of the mighty ASPHYX. The first sign of life from ABYSSUS was an EP called “Monarch To The Kingdom Of The Dead” (‘Angel Of Death’ anyone?). This one saw the rotten light of day in 2012 and showed the band on their way to become what they are. In some moments, the ideas are a little exchangeable, but the first version of ‘Left To Suffer’ and ‘No Tolerance’ with its harmony leads already promised a lot. Nice acoustic piece to finish the latter, by the way – Greek style of course. The (not too) old stuff on this compilation is accompanied by two up to now unreleased extra tracks, both of them cover tunes that again show the roots of ABYSSUS. The choice of ‘Sacred Serenity’, originally on the always underrated “Symbolic” album from DEATH, is a bold one, yet this a little eased version ain’t that bad. And the interpretation of the SLAYER classic ‘Postmortem’ might be filed under: “OK, but not overwhelming”. Looking at the compilation in its entirety, we have a lot of gems and just few moments of boredom, so anyone who liked last year’s “Into The Abyss” is welcome to further check out ABYSSUS here. The same goes for anybody who thinks that Death Metal in the US and especially OBITUARY had their best days at least 20 years ago. As I said, there are just 300 copies of “Once Entombed…”, so be quick – or be sorry and hope for a re-release… More info at: www.facebook.com/pages/abyssus/144338552349700, www.transcendingobscurity.com