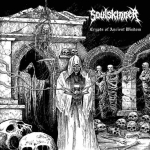 Soulskinner from Athens, Greece are already active since 2000 and have released their third full-length via Xtreem Music in late 2014. After a short intro, the band starts with the first tunes and immediately remind me of mighty BOLT THROWER, so the direction of the band is clear. Old school Death Metal, which nowadays is as popular as it used to be back in the early 90s. Also it seems to become a movement against the modern styled Metal bands, who seem to be even more popular. But this band worships these old days with the right respect. The popular deep grunts are used, as well as low-tuned guitars with a dirty rotten sound, drumming, varying between fast and slow and the typical lead melodies. What makes their sound more variable is the careful use of keyboards and also the careful incorporated Doom Metal parts, which appear from time to time and spark a very dark mood. In some tracks they increase the tempo, like in ‘The Price Of War’, before a wrecking ball like ‘Our Greatest Curse’ slows down the tempo and brings back the stench of the British Death Metal of the 90s. The production is clear and old school sounding, while the drum sound rumbles a bit too much sometimes and make this record sound like a demo release from time to time. But this does not affect the whole picture too much, as the material is fine and recommendable for all fans of this genre and a lot of the Voices readers. An interesting idea was, to write a song in two chapters and put both onto one album in a row. ‘Deadland’ offers all what Death / Doom Metal lunatics are yearning for. The first part is more mid-paced Death Metal, while the second part offers finest Death Metal with a touch of Gothic / Doom and a fine lead melody. For all worshippers of the good old Death Metal days, I can recommend to check this output out and again, Dave Rotten shows his fine taste for underground bands. www.facebook.com/soulskinnerband, www.xtreemmusic.com