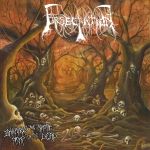 For those who are wondering and seeking a secure listen from a band that has been keeping a constant pace and vision through the years with their own legacy made of tons of works at behind, you are in for a treat then. The relevant good news came from Greece along with the seventh album of OBSECRATION after seven years, a trio that has been roaming the paths of death during three decades in the underground with no pretention on their sight more than to expel Death Metal with conviction. “Onwards The Mystic Paths Of The Dead” follows the scent of the Greek feeling of VARATHRON, THOU ART LORD and even SEPTIC FLESH just to mention a few ones, but with a Death / Thrash approach, especially when you listen to the guitars and that pounding inertia which leads to think about PENTACLE or even PESTILENCE… the palm muted semiquavers reigns mixed up with that evil and energic power of the riff followed by some eerie melodies. Over this bed of razors, thinner threads weaved by the skilled but meaningful solos which brings another dimension in terms of variability to the constant hammering drum tempo and quite a solid structure that OBSECRATION has been cultivating since their first works. About the album itself, it is so round in every aspect that it’s hard to pick a song particularly to dissect, just because the songs advance without looking or turning back shamelessly, giving the impression that through 47 minutes, the intro is the only stop (or start) station so to speak. The only point that seems to be a killjoy is the front cover, the strokes and motive, such as the generic skulls, seem to be disconnected of the magic and force that music evokes through the speakers. To sum it up, it is fascinating to know that there are still bands which have a strong vision and fanatism on their Metal duty, and “Onwards The Mystic Paths Of The Dead” follows the tradition without turning it obnoxious and dull. OBSECRATION knows their focus best, and it shows on the degree of the solid footsteps of this production. Favorite tracks: listen to the whole album you lazy fuck! More band information at: www.facebook.com/obsecration, label contact: www.witchinghour.pl