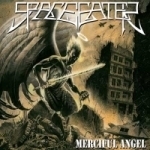 The band name is really weird if you ask me. I even found it was taken from a GAMMA RAY song! Ugh! I mean, I only like very little Power Metal, as most is way too sweet for my ears. But no, after the first riff starts, I knew this was no Power Metal. This is Bay Area Speed / Thrash Metal with a semi-melodic vocalist which almost borders in a high-pitched shouter. This comes packed with a heavy production, which actually fits the style quite well. The cover art might be also weird for the band, it actually looks more suitable to a Black or Death Metal band (an angel with a scary white-eyes look and yielding a sword in what seems to be a ruined city). So it can be a retro Thrash thing, more influenced by old METALLICA, old MEGADETH, old ANTHRAX and even some old NUCLEAR ASSAULT. Now, to the country of origin. I would have expected this from an American band, but no, this is actually a band from Serbia! To be brutally honest, this Bay Area sound was never a fave of mine, because one band sounds almost like all of them. I mean at a time you couldn’t tell a difference between bands like TOXIK, DEFIANCE, SACRILEGE B.C. and others besides the vocalist (well, TOXIK were not from the Bay Area – Ed.). There are some good riffs here and there, and while the vocalist is competent, he just passes as ok and nothing more. Probably for a new generation of fans this will be something fresh, as most Bay Area Thrash bands in a similar style were never that big, but after fully listening to the album, I had really no desire in playing it again. By no means this is a bad album, and while not a blatant copy, as some arrangements are truly different and their own, it all ends sounding with some lack of power and similar between songs. Die hard old school Bay Area Thrash / Speed fans have something to listen here. For the more picky ones (like me) it is just good for a listen every once in a while. http://ihate.se