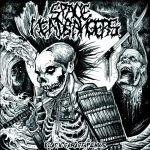 Delivering anarchism and blasphemy for over 20 years, Yasuyuki Suzuki (ABIGAIL, BARBATOS, TIGER JUNKIES, BITCHEATER, etc.), from the Japanese underground scene strikes back with more libertine and devilish music. Those who ardently follow the Far East, more specifically Japan, know their high-octane fusion of Black, Thrash and Heavy Metal from the ’80s with a libidinous twist of punkish fanaticism. No doubt Yasuyuki Suzuki has a lifelong obsession to keep on pursuing madness and this new project with the name SPACE HEADBANGERS offers the debut full-length “Black Garage Punks”. Said to be influenced by MISFITS, RAMONES, DISCHARGE, SEX PISTOLS, BAD RELIGION, BATHORY, HELLHAMMER, VENOM, BEHERIT, etc., this debut album contains 14 Black Garage Punk Rock anthems. What comes out is Speed Metal mixed with Street Punk, also with the level of debauchery and blasphemy in their heritages, as can be listened to from the very beginning of ‘Night For Satan’ and ‘Storm Of The Zeros’, with more up-tempo accelerations and shivering riffing assault aided by throat-slitting vocal deliverance. This will make you possessed and lured to listen repeatedly to get the headbanging pleasure and thumping fists up in the air. ‘Into The Fire And The Wind’, ‘One Two Fuck You!’ and ‘Evil’s Nightmare’ will add more rowdy and maniac sensations. The damned bass line and the contest slithering of the snare fuels the wickedness further. The record fittingly ends with ‘I Like To Whisky Coke’, ‘Goats’ and ‘Violent World’, and reminds of HELLHAMMER, BEHERIT and BATHORY. With a very tantalizing album length of just over 25 minutes, the appropriate production aided to the atmosphere needs to be there for fierceness and debauchery captured on “Black Garage Punks”. Not much info can be found online about this newly founded group of Yasuyuki Suzuki and regarding additional contributions here (including the sadistic cover artwork!). The artwork reflects what SPACE HEADBANGERS captured and delivered in their debut offering. May this surely give hints of many upcoming kickass and tempting releases from the continued quests of Yasuyuki’s SPACE HEADBANGERS. For now, get this release, and spin on repeat till you start battering surroundings violently. Find out more about the group and record at www.bestialinvasionrecords.com