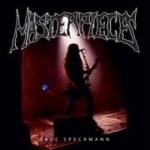 Yeah, I know that this compilation is not the freshest anymore, but as we just asked for a promo of it, we’d like to introduce it to you nevertheless (better late, than never). "Masterpieces" is a collection of songs from various bands / projects that Paul Speckmann was involved in throughout the years, so all in all a good overview for all those of you who aren’t familiar with Paul’s musical activities as a whole. So, what do we have here in detail then? The first two tracks (‘The Line Too Kill’ and ‘He’ll Probably Win’) are both taken from MASTER’s 1994 "Four More Years of Terror" full length, while ‘Fatso’ (probably the shortest song that Paul ever did) originally appeared on the MASTER / EXCISION split 7" EP that got released via Moonstorm Records in 1996. Unfortunately the version that appears on "Masterpieces" here seems to be from the self-titled SOLUTIONS MCD though… By the way: my biggest complain with this album is the lack of info that you’re getting. The booklet only consists of a bunch of historical pictures of various line-ups and that’s it. Not even the releases that the material originally appeared on get a mention… So, reason enough for me to continue on with the results of my personal investigations here: ‘Blood For Oil’ and ‘Pull The Plug’ are from ABOMINATION’s second full length "Tragedy Strikes" (released through Nuclear Blast back in 1991) and I’m a bit insecure where the MASTER classics ‘Funeral Bitch’ and ‘Mangled Dehumanization’ were taken from… the CD says 1989, but the self-titled MASTER album was from 1990, so I guess it’s from that one. ‘Kill With Me’ and ‘Crooked Teeth’ are from the MARTYR album "Murder X: The End Of The Game", that came out on System Shock Records in 2000. ‘Follow Your Saviour’ is the title track of the MASTER mini CD from 2002, while ‘The Truth’ and ‘Re-Entry And Destruction’ are from DEATH STRIKE’s legendary 1985 "Fuckin’ Death" demo (respectively 1991’s "Fuckin’ Death" CD on Nuclear Blast). ‘Cut Through The Filth’ (which also appears as a demo bonus-track on MASTER’s "Unreleased 1985 Album") is featured on here from the "Death Is Just The Beginning II" compilation while ‘Remorseless Poison’ is from 1991’s the SPECKMANN PROJECT album. And last but not least there’s the two tracks off "On The Seventh Day God Created… Master" album, ‘Heathen’ and ‘Latitudinarian’, that close this disc. So, not really an essential album if you already own the complete Paul Speckmann catalogue, but an interesting overview on all the cool stuff that is around by the man. Next time a rarities compilation please! For more info check out www.master-speckmetal.com or www.twilight-vertrieb.de