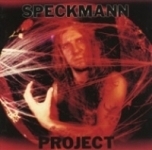 MASTER first made an album with the line-up consisting of Speckmann, Bill Schmidt and Chris Mittleburn, the mix for that recording got turned down by Nuclear Blast head honcho Staiger, Speckmann re-recorded the album with Jim Martinelli and Aaron Nickeas, and again the mix got rejected by the label. Then producer Scott Burns remixed the first recording of "Master" and that was what Nuclear Blast then released. Later on the new recording with Martinelli and Nickeas was released as "Speckmann Project" and that release is now being re-issued by the ressurector of olden Death and Thrash Metal AreaDeath Productions. More Death Metal history released for the sake of the hungry masses or a mean for a quick buck? Considering how many old school Death Metal maniacs there is around, I don’t think there is a quick buck to be found within the genre, only die hards will pick this up, to celebrate what once were, as such as this isn’t being made anymore, at least not up to these standards. Chugging heavy and noisy Death Metal delivered straight on entangled in a nice heavy and dark mix from Scott Burns, a classic Morrisound recording. The lively guitar from Martinelli is right up my alley, I’ve always digged BURNT OFFERING and his shenanigans, and he gives a lot to the darkness of Speckmann’s bass and Nickeas’ pummeling drums. So what’s the best "Master" or the "Speckmann Project"? Well, SPECKMANN PROJECT have the power and conviction that "Master" once in awhile misses, perhaps due to the remix? The tad longer tracks together with the frenzy guitars from Martinelli makes this album my favorite, if I had to choose, it is two quite different outputs we have, even though most of the songs are from the same sketches. And as a nice bonus we get the ’85 demo with a bit other tracklist than I’ve seen before, though still more than nice. Speckmann maniacs you know where to hit! More info at: www.master-speckmetal.net, http://adp.areadeath.net