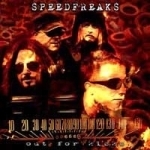 Right from the very first opening riff of the album’s title track, something akin to a riff I believe nicked from METALLICA’s ‘I Disappear’ single featured on the “Mission: Impossible II” movie soundtrack. Straight into a MOTÖRHEAD-ish rock section, I knew this band was going to suck. By the second song, another homage to MOTÖRHEAD called ‘Somebody To Roll’, I still felt this 4 piece from Gothenburg, Sweden was a waste of time and completely not ready for an album deal. Then the third song, or should I say the turd song begins and all I want to do is kick my foot right through my speaker! Honestly folks, I could literally go on for days about how awful these songs are, about how painful it is to sit here and actually listen to these ten cuts over and over again. However, what really is the point? SPEEDFREAKS are a bar band and not a very good bar band at that, and more importantly they should stay a bar band! The title track alone on this disc was enough for me, so you can imagine what nine more lame attempts from a fourth rate MOTÖRHEAD-wanna-be act that has a singer by the name of Tomas Modig, who is obviously and completely tone deaf, would do to your soul! I have seen and heard better MOTÖRHEAD cover bands that would not even allow SPEEDFREAKS to haul their gear, let alone open for ’em. Avoid this CD! Contact: www.speedfreaks.se or www.mondongocanibale.com or Mondongo Canibale Records, P.O. Box 27106, 28080 Madrid, Spain.