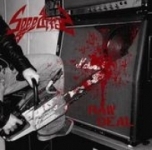 I used this phrase already a few times before and will use it again now as it fits this recording, too: some music is meant to be on vinyl! That’s the case for “Raw Deal” from SPEEDTRAP and I assume that this release would sound kinda outdated to listen to on CD (the CD-version was released through a label called Thunderknights Records as far as I know). Perhaps this is only my humble opinion, nevertheless I have the impression that some music only works on vinyl (or works better on vinyl) and SPEEDTRAP’s brand of Metal is such a kind. When I opened the package from High-Roller-Records and saw the cover of this MLP I immediately had to think on EXCITER’s “Heavy Metal Maniac” as this cover is some kind of homage to this Metal-classic. “Raw Deal” – I don’t know in which situation the guys from SPEEDTRAP got a raw deal, somehow they probably saw the necessity to express this unfairness in the title of their first official release. Perhaps they feel kinda mistreated because this release was only printed on 500 copies so far, haha! Well, that’s the way High-Roller-Records is handling their business. Anyway, “Raw Deal” is for sure not meant to be a topseller as the music is outdated as hell but that’s the case for most of the High-Roller-Records and that’s the charm around it. SPEEDTRAP’s brand of music is, although expecting an EXCITER-type of music (which is only partially the case) mostly influenced by NWOBHM. The sound, the riffs, the vocals, everything sounds authentic and as it was recorded back around 82 – 85 and I’m sure there are a lot of maniacs out there who would give their left nut for releases like this. I can only recommend this release to any fan of the NWOBHM-genre (especially to fans of DIAMOND HEAD, JAGUAR and RAVEN) to check this release out,. Well, we haven’t the next IRON MAIDEN here, nevertheless a great breath of air for fans of NWOBHM. As I wrote before it’s again limited to 500 pieces so better be fast. www.hho-records.de, www.myspace.com/speedtrapmetal.