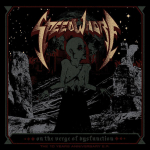 SPEEDWHORE
On The Verge Of Dysfunction
(Witches Brew Records)
18:48min

Here’s one pretty decent Thrash Metal band from Germany. I am not particularly fond of bands with a totally uncompromised aesthetic, especially when it comes to the praise of sheer alcoholic behaviour, since I believe drinking is not an exception among people in the Metal genre and it’s also very cliché. But said that, you can notice quite straight away that these guys play honest Thrash Metal tunes for their own amusement and without any secondary bond to no one else. “On The Verge Of Dysfunction” is the follow-up EP to their debut album “The Future Is Now”, being a 7 track, short release that includes a cover of ‘Dead City’, originally by VIOLENT FORCE. Along with the covered band, other country-fellow Thrashers – as DESTRUCTION for instance – may play a heavy influence on their music, but I think they lack more inventive riffs than the ones present in this EP. The vocals are really good, especially with the high pitched touches now and then (this is a good example for different tastes, because that was exactly what I personally disliked about this release… but hey, I already didn’t like that from DESTRUCTION, older SARCOFAGO or the likes – Frank). I was quite excited when listening to track number 2, ‘Project Babylon’, which has a more Heavy Metal chorus and makes you believe there’s a good blend of subgenres arising there, as BEWITCHED once had, but my expectations were not corresponded along the album. Overall, it’s an OK album, they have the perfect Thrash Metal soundscape but too many generic passages. I truly hope there’s something more coming, for they seem to know how to sound like in the 80s. Not a bad release, but it sounds more like a German Thrash patchwork than something genuinely theirs. More information at: www.speedwhore.com, www.facebook.com/speedwhore-124679414257404, www.witchesbrewthrashes.eu