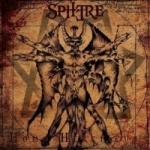 Sometimes the cover art speaks a lot for what the band plays. Yes, that is what in the old times was basic for a band to create a concept of the music in the mind of the headbangers. So, in my book a Da Vinci inspired form with a devil / goat creature, gives this quite a few points, even before listening to the music. I just do not get the name, which for a Death Metal band is quite weird… this is actually the second full length from this band from Poland. Their style recalls the sound of early MORBID ANGEL, IMMOLATION, DEICIDE, SUFFOCATION and why not, VADER. They have a quite epic approach at some riffs thus making their Death Metal quite interesting, maybe even a bit technical without losing the grip of brutality. As a matter of fact the band is quite competent while playing at any speed, something only few bands are capable of mastering. At the same time one can clearly listen that they do have some old school vibes here, such a CELTIC FROST and even VOIVOD. And while at the end most songs will remind you to one or another band, this is very well played, with those hooking sharp riffs that call to invoke forth the beast. Make that SPHERE be of sulphur origin… www.facebook.com/pages/sphere/344673299442, www.masterful-records.com