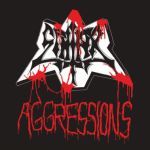 After becoming rather successful in the underground with their “Deathstroke” album earlier this year, these three freaks from Gelsenkirchen, Germany are coming along with some new stuff as an EP. What shall one say, they rumble with high speed through five new tracks, still deeply breathing the old spirit. The hometown obliges, so feel remembered of SODOM from the early eighties, a little bit of VENOM and MOTÖRHEAD and several beercans of Black Sarcastic Metal, played roughly fast and with an itchy sound – but partly a bit more melodic than their idols did back in the days (‘Aggression’ and ‘Prohibition’). But the band has also deep roots in the simple German Punk, so they don’t mind to put a short two and a half minutes track on the record which features this typical Punk sound Germany did develop in the early eighties with bands like CANAL TERROR, TOXOPLASMA or of course SLIME (‘Nutzlos’). Back to Metal, black to Metal, the following last two tracks appear a bit tighter. Still down the cellar-stairs with a hundred miles per hour, but with a few more breaks, some significant black riffs and pretty cool breaks and moshable midtempo-parts to go berserk in the pit to (‘Perished Alive’ and ‘Rising Tension’). Added as an extra – without bonus it seems EPs don’t work anymore nowadays – they put up their 2020 “Deathstroke” demo, which features also an intro and five tracks. ‘Deathstroke’, ‘Intruders’ and ‘T.A.T.E.T.S.’ are also appearing on the full-length album, so it might be the collectors item, which makes this re-release of the demo valuable. Well, the demo recordings sound pretty rough and the barking vocals must be a fest for all those who pull out things like “Endless Pain“ or especially “Obsessed By Cruelty“ regularily. The five new tracks are great to listen to, it will be very interesting to follow the path, these three desperados from Gelsenkirchen will walk. They are built for blackened speed, you know! More info at: www.facebook.com/sphinxspeed, www.facebook.com/profile.php?id=100060886584223