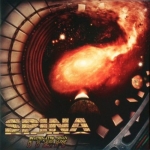 SPINA BIFIDA was a band that has never really acclaimed fame or glory during their short career in the early 1990s. After a demo tape, the Dutch quintet released a full length album called “Ziyadah” on Adipocere before calling its quits in the mid 1990s. Yet, this overseeable legacy was not forgotten by anyone. Some underground maniacs kept the name alive, which led not only to a re-release of all their stuff in 2014 but also to a reunion of SPINA BIFIDA some years ago. And since Rome wasn’t built in a day, it took them a little longer to record some new stuff. Listening to the new EP “Iter”, it seems as if the last more than twenty years haven’t existed. This stuff sounds like it was composed and recorded in, let’s say, 1992. Every second sounds so refreshingly anachronistic, it is a pure joy to those old enough. “Iter” is Doom Death Metal the way it was understood in 1992. It is so fuckin’ slow that it sometimes sounds close to Funeral Doom, musically. The scarcely used guitar melodies have that special pre – Gothic Metal touch a lot of bands in the genre showed at that time. And the deeply growling vocals of new singer William Nijhof leave no doubt that this band is born and still rooted in the days of old. Of course SPINA BIFIDA anno 2015 are not a reinvention of Doom Death Metal, but they nod to the ancient times with class. And if you see “Iter” from this point of view, this EP is a fine statement. If you sometimes tend to be as anachronistic as me, I recommend you to check “Iter” out. Visit SPINA BIFIDA at www.facebook.com/spina-bifida-145516625555403 or their dedicated label at www.facebook.com/godeaterrec