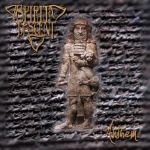 Any Doom freaks out there? Well, this one is for you! SPIRIT DESCENT is a German band, from Hamburg to be exact. Up to now, they have not become that much known, despite the fine stuff they deliver. “Anthem” is their third album, self-financed like their debut “Doominion” – only the sandwich album “Seven Chapters In A Minor" was supported by a label (PsycheDOOMelic). Sad enough, this album will be the swansong for the band as well, since SPIRIT DESCENT announced their split recently on their facebook page. Their final album shows the band musically allied to masters of Epic Doom Metal like the British SOLSTICE or WHILE HEAVEN WEPT. But it’s just the same musical direction SPIRIT DESCENT took on “Anthem”, the lyrical background, settled in the Epic of Gilgamesh, gets entangled with the music here. ‘A Solitary King’ picks up melodies and motives in the intro that are linked to old Sumeria. But then a heavy riff reminds us that this is Metal for sure! A quiet, pretty spherical interlude, called ‘The Dream’, leads the way to the centerpiece of “Anthem”: the two long epic tracks ‘Till Death Do Us Part’ and ‘In Search Of Infinity’, both of them around twelve minutes long. These two show the strongest affinity to the music WHILE HEAVEN WEPT created in their early days, with a touch of sadness, yet strong, atmospheric and epic. With ‘The Plant Of Life’, SPIRIT DESCENT created a song that really lives from classic Doom Metal guitars in the most luxurious way – epic melodies meet transcendence and an enthralling musical gravity. The final ‘Closing Circles (A Place In Eternity)’ opens up with spherical guitars, followed by an acoustic quiet piece that reminds me of 1970s Rock a little bit. Guitars, ten tons heavy, guide the listener to the end of the story. It’s the conjunction of story, conceived by singer Jan, and music guitar player Andreas created around this story that makes “Anthem” an outstanding epos in current Doom Metal. So it’s even more sad that the two long time members parted ways after this album. To check out your doom (and that of Gilgamesh, too), visit: www.spiritdescentdoom.com or www.facebook.com/spiritdescent. And be sure to check their site on band camp: spiritdescent.bandcamp.com. Here you can not only get “Anthem” in a digital version, but also the debut album “Doominion” and a compilation of old SPIRIT DESCENT demo recordings, entitled “The Path Of Doom”, for free. Go there, it’s worth getting all this stuff.