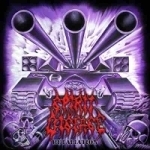 It’s been 5 long yet frustrating years since this 4-piece Finnish hybrid of Death / Thrash Metal and Grindcore, SPIRIT DISEASE, got their debut album out, titled “Annihilation”, on their own label called Twisted Face. I remember liking the band’s debut quite a bit actually, giving it a fair chance to make me half deaf during the album’s sonic beating session. “Retaliation” makes no exception to that rule either. SPIRIT DISEASE’s grinding Death / Thrash Metal bursts out in a raging and hysteric form on “Retaliation” – and the band is still more than determined and ready to wipe our fragile butts the same way as they did on their debut already. SPIRIT DISEASE still tend to remind me of ROTTEN SOUND occasionally every now and then, just whenever they find that more grinding type of gear from their high-octane killing machine, but luckily there’s so much everything else going on within their 2nd record as well – pushing them away from being a plain ROTTEN SOUND clone act by any means. Nope, they are definitely not as they do have a constant drive to stretch their sound even further into extremities, which is nothing but cool in my books. Add a spoonful of AT THE GATES, BOLT THROWER and let’s say, IMPNAZ into the very same boiling cauldron – and you may get an idea of what SPIRIT DISEASE and their 2nd album “Retaliation” are basically all about. The music is thoroughly tightly played. It’s heavy, it’s attacking, it’s masculine-smelling, it’s crushingly heavy, it fries and smokes – and first and foremost, it stands the test of trial (of fire) surprisingly well, when it comes down to the fact “Retaliation” indeed is a successfully crafted wholeness from this skilled Finnish group. Therefore it’s easy to like this record – and ultimately get your necessary kicks out of it, too. It’s time for retaliation now… www.myspace.com/spiritdiseasefinland or www.inverse.fi