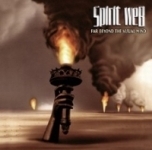 UnfortunateIy I missed out on SPIRIT WEB’s self-titled debut album, but still got really curious how these guys would actually sound like as they got praised quite intensively in various major magazines already. And the fact that the band was originally founded by three veterans of Chicagos Metal scene (guitarist Paul Speredes [ex-SYRIS], Tony Rios [ex-WINTERKILL] and Brent Sullivan [ex-SLAUGHTER XTROYES / WINTERKILL] made things even more exciting to me. For personal reasons Rios is no longer with them these days, but got replaced by another skilled maniac, named Michael Angelo (formerly of NITRO). If you’re aware of the aforementioned acts (which are all rooted in the Heavy Power Metal genre), you’ll already know that SPIRIT WEB ain’t Death nor Black Metal, but that shouldn’t generally be a problem here, if the quality’s there, right’ A way bigger problem (at least to me) is their current musical direction. Even though the old traditional Metal roots are still shining through on the entire record, it’s pretty obvious that SPIRIT WEB are longing for a much more diverse audience. And that unfortunately causes a lot of twists and turns in their writing formular. While the heavier (and to me way better) tunes partly remind me on MEGADETH in their "Rust In Piece" period (‘Slave’, ‘Skies R Grey’, ‘Hellbound Train’), mainly due to Randy Barron’s Mustain-like vocal delivery, they often drastically switch direction and incorporate annoying NU Metal riffing / growling (‘The Game’), almost alternative like stuff (‘Fame And Glory’, which could easily have been a JANE’S ADDICTION tune) and cheesy Hardrock elements (‘Miss Behaven’). Don’t know what they’re trying to proof with that as their top notch musical skills are also shining through pretty clearly in the more traditional / heavier stuff (just check out the amazing bass work!). So, all in all this could have been a way more convincing and heavier record if the band would have decided for one musical direction exclusively. All further info at: www.mausoleum-records.com