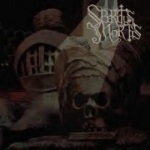 Funny, really funny. 2 weeks ago I received a package from the cool vinyl label High-Roller-Records including (amongst others) a fabulous looking gatefold double LP from Finnish Doomsters SPIRITUS MORTIS. A week later I visited Vienna together with my lady for 5 days and guess which event took place in the Metal pub Escape Metalcorner (nice and recommendable pub, by the way)? A gig from SPIRITUS MORTIS. Great surprise! I snapped at the chance and had a look at their live appearance and have to admit I enjoyed it a lot. Nevertheless it’s the LP I should write about and it’s an easy task. First up, as mentioned above, the gatefold cover for this double vinyl looks amazing. It includes the lyrics for all the songs and additionally another 4-page insert with weird bandpictures and recording information of the included songs. Included on this double LP is the selftitled full-length release from 2004 (originally released through Rage Of Achilles), the 3 songs from their demo 2000, a TROUBLE cover (‘At The End Of My Daze’) and the livetrack called ‘Wasteland’. Plenty of stuff to listen to. SPIRITUS MORTUS play Doom Metal, from time to time Doooooooom Metal, but sometimes also kinda psychedelic Hardrock (just listen to the solopart in ‘Forbidden Arts’), though mostly I hear Doom Metal with reminiscence to BLACK SABBATH, TROUBLE and at the melancholic moments CANDLEMASS. What you get are 19 songs with a playing time of far more than one hour of great Doom Metal played with a lot of heart by talented musicians – which I can definitely say after their live gig in Vienna. Vinyl supporter should have a look out for this release as it is limited to 500 copies. Judging from the merchandise at the live gig I saw some CD-releases in their repertoire so have a look out for these, too. Nevertheless I have to say that this is a well-done release offered by SPIRITUS MORTIS in cooperation with the rising High-Roller-Records and the right choice for music lovers. To tell the truth, some music is meant to be played on vinyl. Doom Metal is such a music… Visit www.hho-records.de and www.spiritusmortis.com.