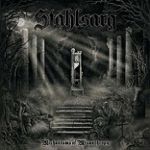 There must be something very special in the German language that bands from all over the world use my native language for song titles or even for their band’s moniker. In this case, it is even more irritating than usual since STAHLSARG is a band from England that used the German word for “Iron Coffin”. Additionally, three of the four band members chose a German stagename and one of the songs of the album (“Das Fallbeil”) has a German title as well. So far, so good, so strange. It’s not my topic to talk about those band decisions here but to tell you something about the second album of STAHLSARG. It’s called “Mechanisms Of Misanthropy” and should be available this Halloween. The tasty cover art feeds the hope for an interesting album, yet this hope is not really fulfilled. STAHLSARG explore the threshold of Death and Black Metal, tending to be on the blacker side. And they are definitely not bad in doing this. The riffing is pretty diversified, the speed alternates between doomy, mid tempo and full speed ahead. Yet, despite meeting all “objective” criteria for a good album, “Mechanisms Of Misanthropy” passes me by most of the time. The more I listened, the more I became aware that STAHLSARG are not my cup of tea. Sometimes I don’t like the mainly fitting vocals of Eissturm in those moments where he sounds like Dani from CRADLE OF FILTH (who I never liked). In other moments, the riffs and breaks are really exchangeable. And finally, the sound of “Mechanisms Of Misanthropy” might be a good one, but for this kind of music, I’d prefer a lot more dirt and rawness. So, in fact STAHLSARG are neither fish nor fowl to me and thus not recommended by yours truly. In case you’d like to find out if you disagree, visit www.facebook.com/stahlsarguk or check out www.non-serviam-records.com