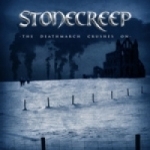 From Portland, Oregon, comes this four piece melodic Metal act called STONECREEP, that is a sort of hybrid of Thrash, Death and Heavy Metal, added some tiny hints from pure Rock in their general musical approach as well. As some recent news from their camp, it should be mentioned that the band was almost recently signed by Californian based Old School Metal Records, so the band’s potentiality has definitely been marked on the books. Prior to “The Deathmarch Crushes On” album, the band has released one full-length studio album and a couple of EPs on their own, gaining some ground for themselves by all those 3 releases. “The Deathmarch Crushes On” is said to be STONECREEP’s most mature and refine work to date (it was released in 2009 already), but I cannot even partially subscribe that statement without having a chance to hear the band’s 3 previous releases. So, basing my judgment strictly on “The Deathmarch Crushes On” for an obvious reason, something inside my head that starts screaming there’s something very familiar in STONECREEP’s sound. There’s definitely something Metallica in them – as well as there’s something in them that sounds like a stripped down version from Children of Bodom. Then again, when the band fine-tunes their machine toward a more extreme side of Metal, throwing some growling vocal lines and even some Black Metal type of shrieks in here and there, I loose my touch with them every time whenever they do so. I mean, they tend to sound maybe a teeny-weeny too mixed package sometimes – and at this point of writing this, I have yet to be decided whether it’s a good or a bad thing. Gladly, it’s still guitarist and vocalist Matt Litton’s clean and charming vocal parts that play the main role vocally, fitting very nicely into the band’s musical direction where the main emphasis is clearly on crushing and heavy riffs. It’s gonna be interesting to see what the future will hold for them because there’s without doubts so much budding potentiality behind this American Metal act. Perhaps a true breakthrough is closer enough behind the door of their rehearsal place already? While waiting for that to be happened, by all means feel free to check them out at: www.stonecreep.com or www.myspace.com/stonecreep