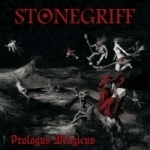 Nothing can beat traditional Doom Metal… with all those warm, organic and honest ingredients making space for some great musical experiences to come. Do you love BLACK SABBATH? What about bands like TROUBLE, PENTAGRAM, CANDLEMASS, ST. VITUS and the likes? Well, just thought so. Me too… The guys in the Swedish Doom patrol STONEGRIFF surely are die-hard fans of all those aforementioned names if the band’s music is anything to go by. "Prologus Magicus" – yes, "Prologus Magicus" – and not that other similar sounding album title from the one and only CANDLEMASS, represents traditional, strongly ’70s oozing Doom Metal at nearly its purest form, paying immensely much homage to some of the forefathers of the proto Doom Metal genre. STONEGRIFF don’t even try to differ from this existing yet largely loved formula but give their best shot for it by some amazing, ear-pleasing results. Seriously, Sweden’s got some traditions for the type of quality Doom feasts before (COUNT RAVEN, MEMENTO MORI, MEMORY GARDEN, etc.) – and STONEGRIFF have just joined the same league with their fellow country Doomsters by this record. It really feels like I could have heard "Prologus Magicus" before but that impression comes from the fact STONEGRIFF really do respect some traditions, having no intention to fix something that ain’t broken. Also, in my opinion Jacob on vocals deserves a special mention for his very wide vocal range – from a dramatic singing style to some truly insane high-pitched screams that he does in between the songs every now and then, adding a whole new chilling effect into STONEGRIEF’s magnetic Doom manifests. "Prologus Magicus" is pretty much a top-notch and highly enjoyable Doom Metal product if just traditional, crispy sounding Doom Metal is something that set your trousers on fire. More info about STONEGRIFF available here: www.facebook.com/stonegriffofficial, label: www.metal-on-metal.com