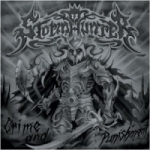 German STORMHUNTER was formed in 1998 – and after several line-up changes until this very day, there’s not one single founding member in this German straightforward sounding, pre-Power Metal combo (the last founding member, guitarist Stefan Müller, left the STORMHUNTER troops back in 2002). That’s kind of rare but not completely unusual to not have any original members left in a band line-up – and every time when I place the band’s 2nd studio album “Crime And Punishment” into my CD-player, I kind of tend to forget the facts whatever I may read about STORMHUNTER’s history. “Crime And Punishment” embodies basically the old feel and vibe of early RUNNING WILD and HELLOWEEN, sounding at the same time both relentless and melodious the same way like the aforementioned 2 legendary German acts used to churn out their Metal anthems for more than 20 years ago. Re-capturing those times in both RUNNING WILD as well as HELLOWEEN vein, was at least that thing in them that made me pretty much to dig the hell out of them. The band’s pure ability to catch very essential parts from the early times of Germany’s ‘2 Greats’ into this opus by shamelessly copycatting the familiar recipe(-s), is what makes STORMHUNTER such a pleasing and enjoyable act to listen to. There’s absolutely nothing fake or wrong in their sound – and actually the more one is ready to sink into the band’s latest release by spending some quality time with it, the more it starts getting stuck tighter and tighter to a music player. Good Metal is always destined to be a good Metal – and that’s what “Crime And Punishment” is full of: strongly up-tempo-ish, straight and honest Heavy / pre-Power Metal that puts a listener in a happy and stress-free mood – and that’s basically all what counts in this type of Metal music after all. Good stuff. www.stormhunter-metal.de, www.emanesmetalrecords.com/shop