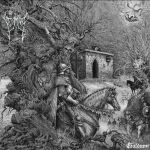 Only rare info can be found about STORMKEEP from Denver in Colorado, but they just have released their first EP “Galdrum” via Ván Records. With nearly 33 minutes running time it could have been easily handled as a full-length as well, but they keep it as an EP. The opener ‘Glass Caverns Of Dragon Kings’ starts with keyboards and is a hommage to old DIMMU BORGIR, as the sound and songwriting is pretty much influenced by the early works of the Norwegian warriors. What I really appreciate here is the old school charme the song spreads. This track could easily have been dealt as an underground 90s release. What also speaks for them is the far more melodic guitar approach and the diversified songwriting. The dungeon-styled keyboards really enrich the atmosphere, while the vocals are kept raw, but also fit pretty well into the picture. I guess STORMKEEP sound like DIMMU BORGIR wanted to sound on “For All Tid”, but they were far more limited back in the days. ‘Lightning Frost’ continues the direction, but is even more atmospheric and melodic. The guitar work is again very melodic and enriched by strings and keyboards, while the good drumming is kept raw soundwise, but once again definitely it all fits perfectly together and the guitar work at the end pretty much nails it. Sure, they present nothing new to the world, but their feeling for an ancient medival atmosphere is worth to check. ‘Of Lore…’ starts with silent strings and flute before turning into Black Metal with male choruses and hateful grim screams, but the lead melody is keeping it melodic and atmospheric. Good hooks and blistering guitars and some DIMMU BORGIR keys are honoring the good old days, but the medieval tunes at the end turn into ‘Lost In Mystic Woods And Cursed Hollows’ which finally takes the listener into the world of castles and campfires. A pretty good debut release as the band managed to let it sound unused. Old 90s lunatics should check the band out via www.van-records.com