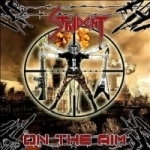 According to the info I received this is the first album released by a Thrash Metal band from Israel. I find that a bit hard to believe, I remember the band NAIL WITHIN releasing their debut album in 2003, and although they had also some melodic Death touches, they were Thrash (how the hell could I forget about that? Especially since Mille of KREATOR, Robert of ASSASSIN and Tompa of AT THE GATES all guested on that record – Frank). Oh, well. Let`s talk about STRIDENT. I would hardly call it Thrash Metal in the purest way as the sound is actually more Thrashcore. They remind me a lot of early D.R.I., DISCHARGE with the obvious touches of MOTÖRHEAD, early SLAYER and Bay Area Thrash like early DEFIANCE. Especially the vocals have that strong Hardcore screamy touch. Now, to refer this band to a similar actual outfit I would say that EVIL ARMY comes close. But whereas EVIL ARMY has some really great memorable riffs and songs, STRIDENT has very few of them. They try to make things all to be intense, but at the same time, they tend to sound the same, and after a few songs I get lost if it is the same track or if I hit by mistake the “repeat” function. There are a lot of “moshing” parts that yes, do refer to the old school of Thrash Metal, but there are also a lot of Hardcore references, that at times are so present that this actually tends to sound in these ears more Hardcore than Thrash. And the lyrics, to top it off, are more in that social awareness and anti-politics that can also be related to the Hardcore scene (ok, ok, some Thrash Metal bands did that too). The production is good for the style with up-front guitars, still the rhythm section, sounds a bit weird, the drums have a synthetic feel and the bass tends to get lost most of the time. So, for being one of the first Thrash Metal efforts, I would say I was expecting a lot more, taking in count this style has been available for at least two decades. I must admit that this is also not a jump on the retro Thrash thing, it does sound honest, but yet there is a lot of road ahead to rise form the countless hordes that play a similar style and do it with more accuracy. More info at: www.myspace.com/stridentthrashmetal, www.israhellbanger.com