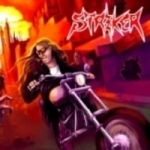 It’s been a while since I stumbled across a Heavy / Power Metal recording that really catches my attention. STRIKER hails from Canadian lands and it has been a breath of fresh air for the berserk of Death / Black Metal releases coming out from everywhere during the last few years. STRIKER is a band that perfectly takes you back in time to the 80s at the time real Heavy Metal bordering speedy Power Metal overtones reigned supreme. Add some screamy wails (damn this guy sounds a lot like Henning Basse of METALIUM fame), unmerciful guitar riffing / soloing, simple but pounding drumming and you will get close to what these guys are really up to! I love the cover concept of a biker being chased by zombies, it sets the perfect scenario for a proper listening of this EP. It is a shame this is just 25 minutes long given the power and passion contained herewith. Do yourself a favor and keep on the lookout for their summer 2009 album. STRIKER is ready to kill… full speed or no speed at all bitches! Contact them at: www.myspace.com/listentostriker