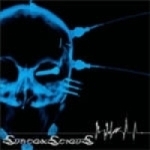 SUBCONSCIOUS from Ludwigshafen, Germany seem to be quite the old stagers in the (Metal) music business: formed in 1990 as a Thrash / Death Metal band, they released one demo in 1992 and two studio albums in 1993 and 1995. In 1997 they split up and were put on hold for five years. After their reformation in 2002 they released two demos and now their third album. I understand that from 1993 to 1997 their musical style was quite different from their momentary incarnation as a Progressive Thrash Metal outfit, namely some kind of Crossover Metal, but it’s quite obvious that nowadays they prefer listening to the technical songs by the likes of ATHEIST, DEATH or CYNIC, who all seem to be strong influences on their compositions. I’m impressed by their formidable instrumental abilities, which allow them to form extremely elaborate songs. The highly complex songs demand a lot of attention and need to grow by a few time of listening in order to enjoy all the interesting ideas of songwriting. SUBCONSCIOUS are prone to play more on the jazzy side of things, so don’t expect some acoustic massacre or lots of straightforward parts, but impressive performances of rhythmical variations, technical riffs and solos. Unfortunately, the nine songs on “Irregular” lose a bit of drive because of the rather thin production, but that’s only a marginal deficit which doesn’t ruin the whole record. To put it in a nutshell, if you’re interested in progressive Metal music – not the brutal stuff exclusively – give SUBCONSCIOUS a listen, they won’t invade your ears instantly, but they will award your perseverance. From www.subconscious-metal.de you can download a couple of songs from their early period to get a first impression, although these songs are not representative for their current efforts.