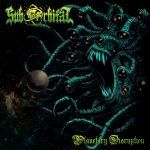 Out of the blue, a new technical Death Metal outfit appeared in the German Death Metal underground scene. Looking at it more detailed, no rookies are working here as this is a project consists of NIGHT IN GALES and GLORYFUL members. Jens and Adriano joined forces with Mark of SELFDEVOURED and Adrian of GLORYFUL. At least from Jens and Adriano I would not have expected such a project but “Planetary Disruption” is a very enjoyable journey into technical Death Metal. Somewhere between PESTILENCE, NOCTURNUS and ATHEIST, the four piece shreds the listener back into the 90s. The vocals are sick as hell, somewhere between Tardy, Mameli and van Drunen, while the guitars groove as hell and the precise riff work and leads really are damn enjoyable. What makes it even more enjoyable is the mix between technical riffs and classic Heavy Metal tunes. Once again Jens shows his immense portfolio of skills. He also recorded the bass lines. Rumours say that the drums have been recorded years ago. Yes or no, the drum work sounds killer here and I always liked Adriano’s work in NIGHT IN GALES. The overall compositions are damn good and especially the DEATH influences like in ‘Sand Of Uranbus’ or ‘Sicknature Of Galactic Imperium’ really nail it. Fantastic compositions on an outstanding album. Mentioning too many single tracks would be unfair to the remaining ones as there are really no fillers on the album. The production sounds great and gets rounded off by a cool cover artwork. This album definitely is a huge surprise and really worth to check for all old school lunatics who liked the technical stuff in the 90s. I hope this won’t be the last sign of life of this really cool project. For more SUBORBITAL information, check out www.facebook.com/metaoccultist or simply order your copy, instead of wasting precious time, from www.facebook.com/waranthemrecords