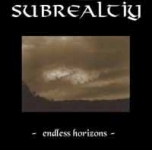 Impressive, very impressive! This output dates back to 1996, when it was first released. Now it is re-released via Black Hate Productions, so every one of you should be able to get this unique masterpiece of gloomy and melancholic Dark Metal! Formed by members of DARK TRIBE, SUBREALITY are no longer active, it is more or less a kind of tribute to the old days and should show the roots and the musical development of the involved musicians. On “Endless Horizons” you will find five songs plus outro. Due to the short running time I do not know if this one can be considered as a full-length album, but that does not matter at all! The music is just so intense! All songs are mid-tempo based, with slow parts. The sometimes melodic riffs really arouse a dark, dim atmosphere, with a strong melancholic approach. The vocalist is changing from husk shouting to deep growls and clear chanting, even some spoken parts can be heard. As I wrote above this album is unique, I can not tell you any band which this music can be referred to. The only album that maybe can compared to “Endless Horizons” is the all time classic “Dance Of December Souls” by KATATONIA. The same dark, depressive mood. Nowadays a lot of bands play Dark Metal and are trying to create such a feeling by using lots of keyboards, female vocals, orchestra or whatever. SUBREALITY impressively demonstrate how to perform Dark Metal without anything than just guitars, bass, drums and vocals. The sound on “Endless Horizons” is rather rough, but it is suitable to set up this raw, melancholic, dark, depressed vibes. So if you like the mentioned KATATONIA album or if you are bored by the today’s Dark Metal bands and their futile tries to create something really atmospheric, then check out SUBREALITY – “Endless Horizons” Highly recommended! Label contact: www.blackhate.de