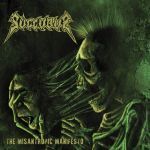 Of all the bands with the same name, these are some crazy Swedes that usually dwell within the more extreme genres. But on here, they decided to go in a more Thrash Metal vein with lots of groove not far away from what nowadays EXODUS or TESTAMENT are doing. The vocals are a mixture between tormented screams and quasi melodic words with more than the occasional death grunt for a good mix. The production is good, if maybe the drum sounds a little bit plastic. The main member of the band, Kjetil Lynghaug is also the guitar player for Death Metal legends PAGANIZER and he takes care of everything here except for the vocals that are done by Jonny Pettersson who plays the guitar in MASSACRE and also WOMBBATH, to name a few. So by now you must know that this is very much influenced by the old Bay Area Thrash sound, and the band is not exactly playing fast or violent, most of the time they use a lot of melody and groove. I would say that most of the time I am reminded of albums like “Impact Is Imminent” and “Souls In Black” than anything else. And as good as this is played and the emotion one can feel, it really falls short of what I expect for a Thrash Metal band. I mean, many riffs brought a smile on my face as they recall those MTV days where more mainstream Thrash videos were shown and not at late hours, but also at the same time it was when those Bay Area bands were in their third albums or so, and then drifting away from their more violent origins, which made many fans to look for more heavier sounds. Bay Area Thrash fans can go no wrong. More info at: www.facebook.com/succubus-108815010814706, www.facebook.com/ibdc666

Julián “I Am The End” Núñez

Julián “I Am The End” Núñez