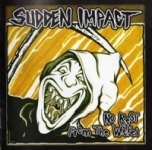 SUDDEN IMPACT
No Rest From The Wicked
(Marquee Records)
65:13min

It’s kinda weird… even though I was heavily into tapetrading back in the 80s and as a result also came across a lot of the Hardcore Punk / Crossover acts from back then (D.R.I., C.O.C., RAW POWER, M.D.C., THE ACCÜSED, GBH, DISCHARGE etc.etc.), for some strange reason never really managed to listen to Canada’s SUDDEN IMPACT before. Of course their name immediately rang a bell to me and I was also familiar with the pretty famous sleeve design of “No Rest From The Wicked” (done by the band’s guitarist Reid English), but somehow missed out on them until about twenty years later now. Unlike with extreme Metal, I wouldn’t necessarily still consider myself a fan of this genre nowadays, but gotta admit that their straight ahead, into your face attitude impressed me quite a lot and brought back a lot of memories from a far more intense period in my life (no, I wasn’t this lazy all the time). This CD re-release features the complete 1985 “No Rest From The Wicked” album plus the 10-song “Freaked Out” debut demo as well as another 2-song studio recording (“James O Session”). Those two demos not only feature a very cool version of the old TED NUGENT classic ‘Gonzo’, to me they are furthermore even more impressive in terms of the rawness and intensity than the actual album. An 8-song live show from April 1986 as well as a cool booklet with historical info, lots of vintage pics and all the lyrics complete the picture. So, all in all surely a classic of its time, recommended to all fans of intense Thrash / Hardcore crossover. More info at www.marquee.com.br