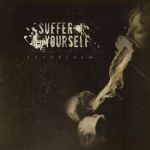 In times where some bands are trying to put more speed to their music, there are other acts that are trying to do everything the opposite. One of those bands is SUFFER YOURSELF from Poland, currently relocated in Sweden. “Ectoplasm”, their second full-length, was reissued by Russia’s Satanath Records and More Hate Productions and contains 5 tracks distributed in more than one hour of music. SUFFER YOURSELF plays a kind of atmospheric Funeral Doom with Death Metal elements. The first song here, titled ‘Ectoplasm’, is 10 minutes long and is a good general approach to this album. After a short intro, the music begins right away with a scream followed by a growl. Immediately acts like IN THE WOODS… (first album) or DEINONYCHUS (“Insomnia” era) come to my mind. The music sounds similar to Italy’s VOID OF SILENCE (the atmospheric side) and Finland’s COLOSSEUM (the “funeral” side). The music is heavy, slow, suffocating, sometimes ritualistic, dark, and… slow! The occasional use of keyboards fits in a good way with the music, but the main atmospheric element here is the good work on guitars, sometimes similar to DISEMBOWELMENT / INVERLOCH (just listen to the second track, ‘Abysmal Emptiness’). Arpeggios, effects, clean guitars and solos are good resources in that way. If you are into Funeral Doom or Doom / Death metal, try to get this album (Cimmerian Shade Recordings released it as digipak CD and cassette, a 2 LP vinyl edition will be available later this year – Frank). More info here: www.facebook.com/sufferyourself, label contacts: www.satanath.com, www.cimmerianshaderecordings.com