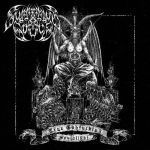 Caffeinated soft drink with taurine. Increased caffeine content (32mg / 100ml). Don’t worry, this site is still about music, but the German label Schwarzdorn Production is selling such cans with with the artwork of “True Godfucking Soulblight”. SUFFERING SOULS are a one-man band, having released four albums during the last 20 years and the present release is a compilation of unreleased songs, one live track plus the demo tape “When Silence Cries Eternally” (1998) and the “Cries Of Silence” EP (1999). Lots of crying, by the way. Musically the eleven songs are a return to the second wave of Black Metal with a strong influence of very early works of DIMMU BORGIR and CRADLE OF FILTH. The time when Black Metal tried to sound more symphonic by using keyboards. What I liked most about the songs are the varied vocals, it is all there. The grunts, the shrieks, the gnarling, some interspersed female vocals. At some moments it feels like Dani Filth (vocalist of CRADLE OF FILTH) is just waiting to appear behind a tombstone. The songwriting rumbles at some places and the sound is rather lo-fi, but that what makes the charm. Especially the live track (why only one?) has that special sound. Objectively considered it is awful, totally unbalanced and overmodulated. But that was how Black Metal sounded in the early 1990s. SUFFERING SOULS are not going to win a prize with that release, but I think it will find some Black Metal fans. For band contact please visit www.facebook.com/suffering-souls-official-155361931188672, the label can be found here www.schwarzdorn.de