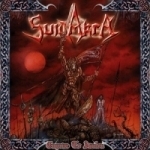 On their 5th release German Black / Death band SUIDAKRA present themselves as a naturally matured act. No cheap German sounding parts, just pure music. Nowadays they don’t have to hide from international acts. What makes them special are the acoustic, sort of ‘medieval’ parts they integrate quite skilfully. ‘Emprise…’ doesn’t have a real hit character, so it might not sell as well as other bands’ releases from that genre. On the other hand the record doesn’t start getting on one’s nerves – a phenomenon I was haunted with too often in the last couple of years. So if you’re really into this sound and if you’d like to discover rather than be gripped right from the start: this album is definitely a so-called grower. Cool. www.suidakra.info