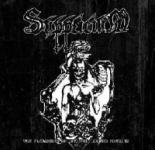 Within the last several years, many a forgotten Death Metal band has resurfaced and lived again through compilations containing their demo material re-mastered and re-assembled for fresh, young souls. Because of this practice, hordes of talented youth gained exposure to a pure moment in underground history. Now, at last, Mexico’s SUPPLICIUM have received the same treatment. “The Pleasures Of Immuted” collects the bands demo and old rehearsal tapes. Their 1999 debut album, “Beneath The Cloak Waiting The Gloomy Existence”, sadly was not included. You may expect to hear true dark, old school Death Metal from Mexico. Mexican Death Metal has, at least for me, always bore a resemblance to the United States’ darkest bands, particularly bands from the tri-state area such as INCANTATION, GOREAPHOBIA, and BURIED BENEATH – a style completely distinct from Florida’s Morrisound production values. I appreciate both styles, but the northeast bands had a peculiar eeriness, cavernous, miasmal quality to them. More like Finnish Death Metal than anything else, and this is the style to which SUPPLICIUM subscribe, albeit with an emphasis on older, evil style NECROVORE and SARCOFAGO melodies. You can see the band start to change towards the second half of the CD: production gets better, musicianship tighter, the songwriting more distinct and representative of the band’s identity. A more ethereal feeling saturates the second half, rather like PAN.THY.MONIUM, from Sweden. I don’t know what the scene had to say about SUPPLICIUM in the old days, but I’m sure they were praised. While there are some issues with musicianship, and some of the songs such as ‘To Meet One’s Doom’ are far too long (almost ten minutes!) it’s good to bear in mind that most of these recordings were taken from rehearsals early in the band’s career. Therefore the display captured on this CD is not indicative of where the band’s talents lie today. Word is that they’re active again, so with luck we won’t have long to wait to see how the years have treated SUPPLICIUM. occultelohim@yahoo.com.mx