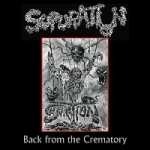 SUPURATION
Back From The Crematory
(Xtreem Music)
70:05min

Ahhh SUPURATION… Those were the good times! Along with PUTRID OFFAL, MASSACRA and AGGRESSOR these were the very first European extreme Metal bands that I started worshiping back in the late 80s / early 90s. They were untouchable at the time and bands like these left an undeniable mark on me as a teenager. Revisiting the material after all these years is definitely a blast. Whoever listens to these songs for the first time now would never understand the sweat, tears, snail mail postage, normal bias tapes and unrelenting enjoyment that these songs actually meant back in the day they were released. This band was a radical blow to the scene at the time, not only because of their elephant-like heaviness but also due to the craziness, just think about it, Death Metal was at its pinnacle at the time and SUPURATION stumbles into the scene with their gruesome songs including keyboard passages and weird song structures! Obviously this generated some reactions, many hated them, in my case I fell in love with the whole thing instantaneously! The music contained here is their best, nothing more nothing less! The CD includes the band’s awesome self-financed debut mini CD "Sultry Obsession" (’90), their only demo "Official Rehearsal" (’90) as well as the impossible-to-find demo of the band’s very 1st studio recording "Haunted" under their previous monicker ETSICROXE as well as a 9-song live show, both from ’89. Remastered sound and packed in a total old-fashioned layout, 12-pages booklet featuring an exclusive interview, liner notes and tons of old photos and flyers. Get this now or be a poser forever! www.myspace.com/supuration, www.xtreemmusic.com