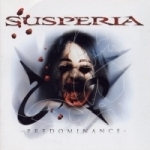 SUSPERIA is a new Norwegian band formed by Tjodalv (ex-DIMMU BORGIR, OLD MAN’S CHILD) and Cyrus (SATYRICON, OLD MAN’S CHILD) at the end of 1998. After the release of the demo “Illusions Of Evil”, they received proposals from several record-companies, a contract got signed with Nuclear Blast for 4 albums, with the debut “Predominance” as a first result. Already from the very first song, you can hear easily that SUSPERIA is musically not that far from their label-mates DIMMU BORGIR, with the biggest difference that in SUSPERIA the guitars are more prominent than in DIMMU BORGIR (where the keyboards are much more dominating). Also the vocals don’t differ that much from DIMMU BORGIR and vary from the typical Black Metal screamy vocals to clear vocals. Also the sound and the production of “Predominance” is crystal-clear (I am almost certain it got recorded at the Abyss studio), so you can hear the many different aspects and details of this album clearly. It wouldn’t surprise me if SUSPERIA will have a huge impact one the scene in a very short time and will become as successful as DIMMU BORGIR (which they will tour with through Europe in April). A good and solid dark metal album, worth to check out.