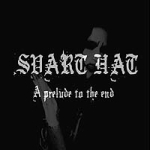 SVART HAT – the translation of the band name means “black hate”, and that is exactly what you will find on this LP. The French based outfit is so “wicked underground”, that I got no information about the band members (do not even know how many) or any previous releases. “A Prelude To The End” is a vinyl-only release, in Germany published via Black Hate Productions, limited to 150 items. May be cliché, but this kind of music is more or less a like it or not affair. It reminds me of the first BURZUM albums, especially this ascetic song writing and the desperate shouting. Most songs are rather played fast, one riff got repeated again and again, sometimes a little bit of a melodic touch can be heard and the few slower parts support the black and hateful atmosphere of this output. Vocals are performed in a way that makes your blood freeze… desperately screaming, crying, moaning shrieks. Sounds like Count Grishnack himself. The drum (computer?) sound is a weak point. It is too loud and really got a sterile touch. But namely it’s the only inconvenience of “A Prelude To The End” and it does not has much negative effect. At least one aspect has to be mentioned. The fact that this LP can be regarded as an one to one (early-) BURZUM copy. That is correct, but it is really the same atmosphere like BURZUM and not many bands managed to achieve this level and for me they got enough own ideas within this very limited sub-genre, so it is not boring to listen to SVART HAT. But as always, everyone has to decide on his / her own whether to support SVAR HAT or not. Label contact: www.blackhate.de