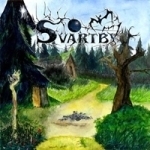 In the dark times a small bunch of the well known FINTROLL got lost in a enormous Blizzard and disappeared for several years. In 2008 they luckily returned to the surface not far away from their homecountry because they are lazy beasts. The new tribe is called SVARTBY and they heading from St.Petersburg to conquer whole Europe with their impressive debut “Kom I Min Kittel”. As you can see by my introduction SVARTBY is terrible inspired by FINTROLL but, and this is more than impressive because we are talking about their debut release, they are as hungry, cruel and hard drinking as their big brother from Finland. The album is offering 10 songs of Folk Black Metal with Swedish lyrics in their purest form which should bring every party with or without a real Troll to the boiling point, just start with ‘Moder Av Alla Häxor’ and you will understand my point. The invasion has just started – so be prepared the Trolls are on the run… www.trollzorn.de, www.svartby.com