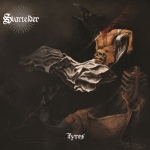 From the deep woods of Norway, SVARTELDER rose to leave their mark on the Black Metal scene. Those who still read after this cliché introduction will get another maybe deterring information: this band consists of musicians that are or were also active in other more or less well known bands. CARPATHIAN FOREST, GREEN CARNATION, IN THE WOODS…, BLOOD RED THRONE, EWIGKEIT and NORDJEVEL, to mention a few better known names. This means, that there are members of bands of the faster and truer kind as well as of bands that redefined Black Metal. And as different as these bands are, as indifferent is SVARTELDER on their first full length album “Pyres”. From the first notes, this half-baked mix of classic Black Metal and progressive ideas passes me by. The problem is that SVARTELDER neither really opts for the epic Black Metal way, nor for the more progressive and atmospheric Black Metal and thus sounds a little bit as if they recycle ideas their members didn’t use in their main bands. The pretty unvarying vocals in classic Black Metal style very soon turn out to be the last shovel that buries the originally interesting idea of SVARTELDER. Before you get me wrong – this album is not a complete disaster. Some ideas and moments are actually pretty fine, like the ultra-tough Doom part in the beginning of the opener ‘Guds Helvete’ or the first harmonies in ‘Ingen Vet Jeg Var…’. But the boring two parted ‘Stygian Macrocosmos’ on the other hand is hard to bear without falling asleep. ‘Realm Of Breathing Eyes’ even has a lot of Death Metal moments, especially in the drumming, and turns out to be the best song on “Pyres”. The final ten-minute-song ‘Devil Of The Flesh’ might have been a fine closing epic, but turned out to be a lot too boring. So, in conclusion it can only be stated that good musicians in sum not automatically mean a good band. In case you’re interested, check the band out at www.facebook.com/svartelder, https://svartelder.bandcamp.com, or the label at www.dusktone.eu