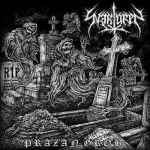 Its not that easy to say something special, explaining SVARTGREN’s first full-length LP “Prazan Grob”. It is a decent Black Metal album. No doubt. But it more or less stays that way. At the beginning it feels like the album has what it takes to raise to some of those evil eastern European black masses, with which we have been spoiled over the last years. But it turns out to be more of an observer then an evil conjurer. The first song is a good example for the whole LP. It starts pretty auspicious and but then it also starts to weaken somewhere in the middle. It’s a good song, as well as many others on “Prazan Grob”. Tight played and nice arranged. But then I feel like I have heard this a thousand times before. They definitely know what they are doing with their instruments and the arrangements. There is nothing wrong with the recording either, which is clean but still has a raw substance. It’s just not blowing my mind. Good thing is: not every LP is supposed to. Some are just the needed nails to build the final coffin for an empty grave. See for yourself! For anyone who enjoys MGLA, FURIA, PLAGA and stuff like that, you might like this too. www.facebook.com/pages/svartgren/171275032076, www.hidden-marly.org