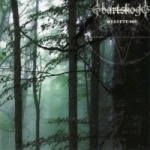 SVARTSKOGG is a German band. Don’t we hate it all when Germans give a Norwegian name to their band? YES, we do! Everything (name, cover, layout, pseudonyms…) construes to a harsh, cold and probably boring 08/15 Black Metal band, a rip-off of bands like Darkthrone, Mayhem, Burzum and such. But SVARTSKOGG is definitely no Norwegian rip-off, but a German one. First band coming in mind is INFERNÖ, and yes, they are not Germans, but have purloined riffs of old KREATOR and DESTRUCTION, too. Especially the opener ‘The Beyond’ sounds like a typical INFERNÖ song. The riffs and the song-structures are the same. What confirms my opinion the most are the vocals, as they sound also like those of the INFERNÖ vocalist (which actually means it sound like a raped cat). Well, it has to be mentioned that it is not as bad as INFERNÖ, to be honest: just the stupid names etc. would bother me to buy that album. The music is partly mixed of two elements: headbanging-able stuff and grim melodies. If you can’t get enough of German bands like DESASTER you can risk an ear. But don’t expect the same professionalism as on the albums of the German masters of desaster. This one sounds a bit cheap sometimes, but that does not mean shitty. All in all, I appreciate this stuff ten times more than as if it would sounds like a boring TNBM rip-off. But I really don’t know what kind of listeners they want to reach. www.perishinlight.de